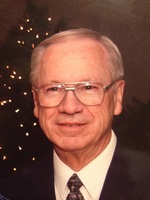 Allen Ray Smith, 87, returned to the waiting arms of his sweetheart on Sunday, January 3, 2021, after a short illness. He resided in Colorado Springs, CO since 1964, living a wonderful life there with his wife Mary Ann, and raising their five sons.

Allen was born in 1933 in Mt. Pleasant, Utah, to Sherman & Olive Smith. He had one sister and two brothers, one of whom survives him. In Mt. Pleasant he met and married his childhood friend, high school sweetheart, and eternal companion, Mary Ann.

Allen graduated at the top of his class at Utah State College, earning multiple awards and honors. He was offered positions at GE and General Dynamics, but it was when Bill Hewlett, of Hewlett-Packard, came to Utah State to cherry-pick the top one or two grads from the engineering class that Allen found his career. He spent eight years in Palo Alto, CA, then was offered the opportunity to transfer to HP’s new division in Colorado Springs. He worked for HP a total of 38 years, retiring in 1993 as the Division Quality Control Manager.

Allen was a faithful member of The Church of Jesus Christ of Latter-Day Saints throughout his life and served diligently and humbly in many callings. He served his congregation as a bishop for six years, while working full-time at HP. He also gave his time to service organizations in Colorado Springs.

After his retirement, he and Mary Ann served an 18-month service mission at the Bishop’s Storehouse, ordering, organizing, and distributing food and supplies for those in need. They also served full-time in the presidency of the Denver LDS Temple for three years. After her death in 2011, he continued serving in the temple, for a total of 22 years, leaving his service there in 2017.

A private family service will be held on Saturday, January 9, 2021.

All rights reserved. This obituary is also archived at obittree.com